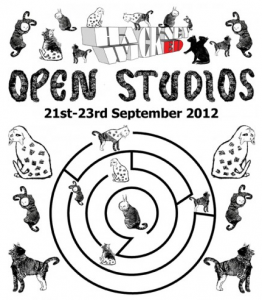 Following on from their succesful weekend down at the Red Market in Shoreditch in late August, Hackney WickED are continuing their celebration of the local arts scene in Hackney with an ‘Open Studios’ weekend, which will see most of the artists’ studios in Hackney Wick and Fish Island open up to the general public from Friday 21 to Sunday 23 September.

Step through the doors of many of the unassuming post-industrial buildings that you’ll find scattered throughout Hackney Wick and you’ll discover that there’s a thriving creative community that covers all disciplines, from sculpture to graphic design. The ‘Open Studios’ weekend is an ideal opportunity to investigate the amazing diversity of the work that’s being produced here. As of today’s date the participating studios are:

I imagine that there will be a few more galleries to add to this list before next weekend – I’m sure that the great people at the CRE8 Lifestyle Centre and Cult Mountain in the Old Baths will be welcoming visitors, for example. I definitely recommend a visit there anyway given that one of Berlin’s most celebrated street artists, Txus Parras, has recently decamped to the Eastway…

China To Hackney Festival - 8 To 12 August

Filed Under: Arts and Culture, Events