Here’s a little list of what are likely to be London’s most diminutive spots – some are certainly open to debate, so if you know better please do add a note in the comments field:

The Bonnington Square Pleasure Garden occupies the space left by a small group of houses destroyed during the Blitz and was created in 1994. It was designed by local residents and the members of the Bonnington Square Garden Association and I’m sure that, looking at the photographs, you’ll agree that it is a delightful spot. It has a particular unique feature in its marble cutting wheel, rescued from a local factory, which stands at one end of the garden, Surprisingly it is also a popular space in the evening, when it is lit by uplighters and tea lights. Over the years this tiny public space has become the heart of the local community. 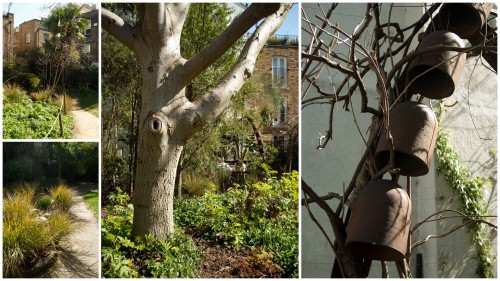 Venture over to 110 Goldhawk Road in Shepherd’s Bush and you’ll find a tiny house wedged between its neighbours – at only 5 and a half feet wide it’s certainly a contender for the narrowest house in the city, and also for one of the most garishly painted!  The bedroom on the top floor is only very slightly wider than the double bed which occupies it…

Created during London’s 1980s housing boom, a third floor flat in Viscount Court, Pembridge Villas, Notting Hill is quite likely to be  the smallest flat in the capital. Converted from a store cupboard and only measuring 7 feet 6 inches by 3 feet 4 inches, just five years ago it was estimated to be worth about £100,000. One can only imagine that its valuation was based on its location rather than its amenities! 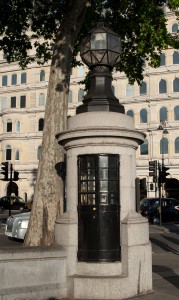 This one will be no secret to most Londoners, or indeed to the many tourists who will have passed by when they’ve been taking in the sights. Just off the corner of Trafalgar Square is a small cylindrical room which from 1926 housed a single police officer who watched over the square. Later in its working life it was used as a cell to incarcerate people who were found to be drunk and disorderly on the square, but in more recent years it has found a far more mundane use as a storage room for cleaning equipment…

There are two contenders for this particular crown. It’s either the long-established Feathers on Linhope St in Marylebone, which only has room for a handful of tables and chairs (stepping inside apparently feels like walking into someone’s living room), or The Rake at Borough Market. The Rake is owned by the guys from the popular Utobeer business which has a regular stall in the market selling imported beers. They serve over 130 different tipples from all over the world in the pub, and offer over 2000 through their wholesale business.

A Hidden Corner Of Kensington Gardens

Burying The Past At Brompton Cemetery

The best Hotels in London